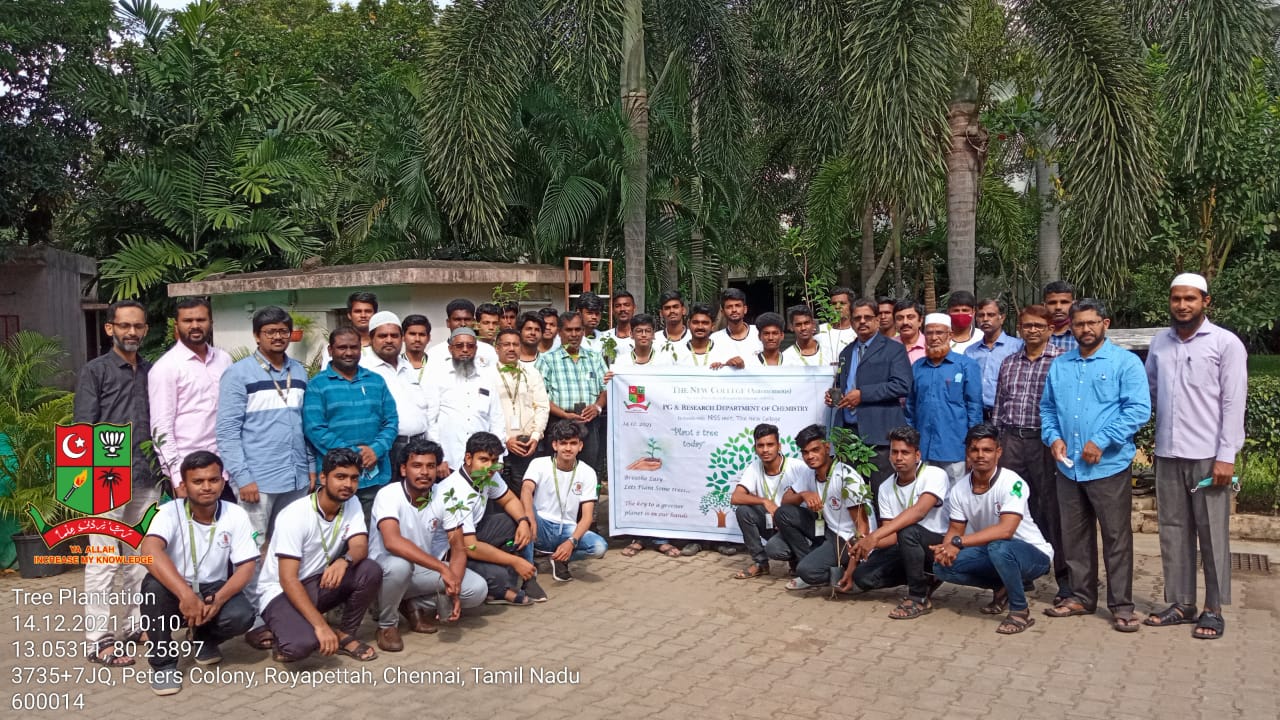 partment of Chemistry has come a long way catering to the needs of the society besides making inroads into the field of research, few years later. Two of our Faculty members, Dr. M. R. M. Jainudeen and Prof. Avaram Abdul Hakeem served as the Vice – Principals of day and evening college respectively during 2001 – 2002. Prof. Avaram Abdul Hakeem during 2002 – 2005 and Dr. A. Abdul Jabbar during 2018-2020 served as the Principal of the college. The PG and Research department of Chemistry is the biggest science departments in the college with 21 Faculty members to impart education in Chemistry at UG level for more than six decades ant at PG level for more than four decades. The department has two batches at UG level and one batch at PG level. Also, the department handles classes for four batches of Allied Chemistry and provides M.Phil. and Ph.D. research programmes. The Department has currently more than 325 students on roll. After attaining the autonomous status, the syllabi of B.Sc., M.Sc., and M.Phil., are redesigned with a view for providing courses relevant to the needs of the time. The Department has Internship programme and Project mandatory for the first year and second year PG students, respectively. The Department has research facilities with more than 10 guides supervising M.Phil. and 3 guides supervising Ph.D. programmes. More than 50 Ph.D. and 360 M.Phil. scholars were produced so far. The faculty members of the Chemistry Department have published more than 100 papers in the reputed National and International Journals. The Department Library is equipped with a good number of books and journals. The Department organizes Seminars and Conferences regularly. The department organized ADVANCES IN SPECTROSCOPIC TECHNIQUES AND NANOMATERIAL (ASTN) on 22nd February 2019, a one-day seminar on “GREEN CHEMISTRY” on 14th February 2018, “YES, YOU CAN”, a special motivational lecture on 10th October 2017, a two-day National Conference on “ECO, SONO and NANO CHEMISTRY and RECENT ADVANCEMENTS IN CHEMISTRY” in December 2016, “NEWCHEMFOCUS-2015” a two day Multidisciplinary seminar on 25th & 26th February 2015, “CHEMLINKS 2014” a one-day state level seminar on 25th February 2014, “NEW SEED 2012” a two-day State Level Seminar, Debate and Quiz under the banner New College Science, Environment and Energy Day 2012 (February 2018) on 28th and 29th February 2012. Also a one-day workshop was conducted on “Microscale Experiments in Chemistry” an eco-friendly programme on 18 July 2012. The Department also conducts inter-collegiate cultural program titled “NEWTRON” during 2018 and 2019, intra-departmental sports events titled “NEW CHEM SPORTS” from the year 2019. The faculty members also conduct remedial coaching class for the students who do not perform well in the examination, this class was conducted during 2016, 2017 and 2019. The Department have been given special status by the FIST (DST), Govt. of India, which had sanctioned a sum of Rs. 30 lakhs out of 77 lakhs sanctioned to the college for the improvement of the Department.

VISION OF THE DEPARTMENT

To stimulate the young minds to contribute to the chemically literate society through active participation in learning and research.

MISSION OF THE DEPARTMENT

To produce skilled graduates in chemistry with highest professional standard, moral values and well-being to society.

GOALS OF THE DEPARTMENT

To provide innovative, dedicated class room instructions at both undergraduate and post-graduate levels.
To achieve state of the art research with cutting technologies.
To teach and train the students with updated knowledge and analytical skills.

OBJECTIVES OF THE DEPARTMENT

Ph.D Supervisors and Areas of Specialization

M.Phil. Supervisors and Areas of Specialization


Employment Opportunities
Highlights of the Department